In order to succeed in the modern world, organizations need to adapt to the changing time and constantly develop. Alongside keeping up with technological achievements, the fight to win over and keep valuable employees becomes more and more intense. Today, as never before, it is important to spare more time on staff-related analytics, study their interests and by sharing common values, ensure their complete integration with the company.

In traditional approach, we see the organization as hierarchy structure where individuals have assigned positions and ranks. However, in reality, in everyday interaction, employees form complex collaborative network which is backstage and actual structure of the organization’s work. Here is exactly where we can discover true leaders and have a clear understanding of organizational risks. Organizational development and effective talent management starts with comprehensive research of network structure. 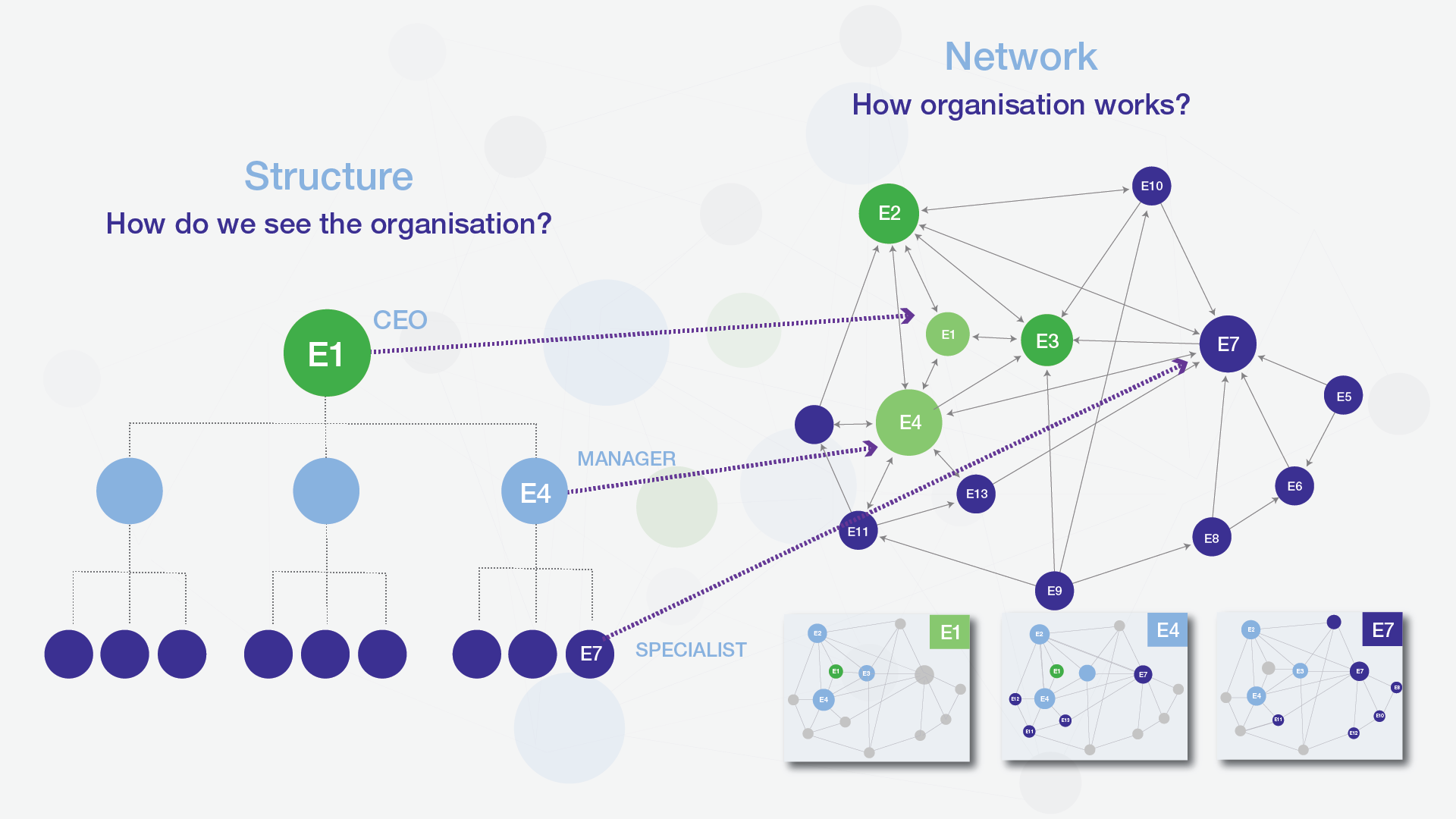 Interaction formed between employees in the organization is extensive. Collaboration on one hand is related to business life – daily workload, decision-making process, tackling problems, sharing expertise and innovations and on the other hand, it also covers human relationships which are social activities, sharing emotions and friendly support.

Complex analysis model offered by ACT ensures identification of competence and opinion leaders which may act as a basis for planning and implementing transformational process.

Through combining our own and international experience, we have developed innovative approach to study hidden mechanism of how organization works. The said approach is based on organizational network analysis principles and comprehensively studies its anatomy. Network analysis combines visualization, math modeling, statistics and opportunities of Graph Theory, this synthesis enables us to discover any network and conduct diagnostics. 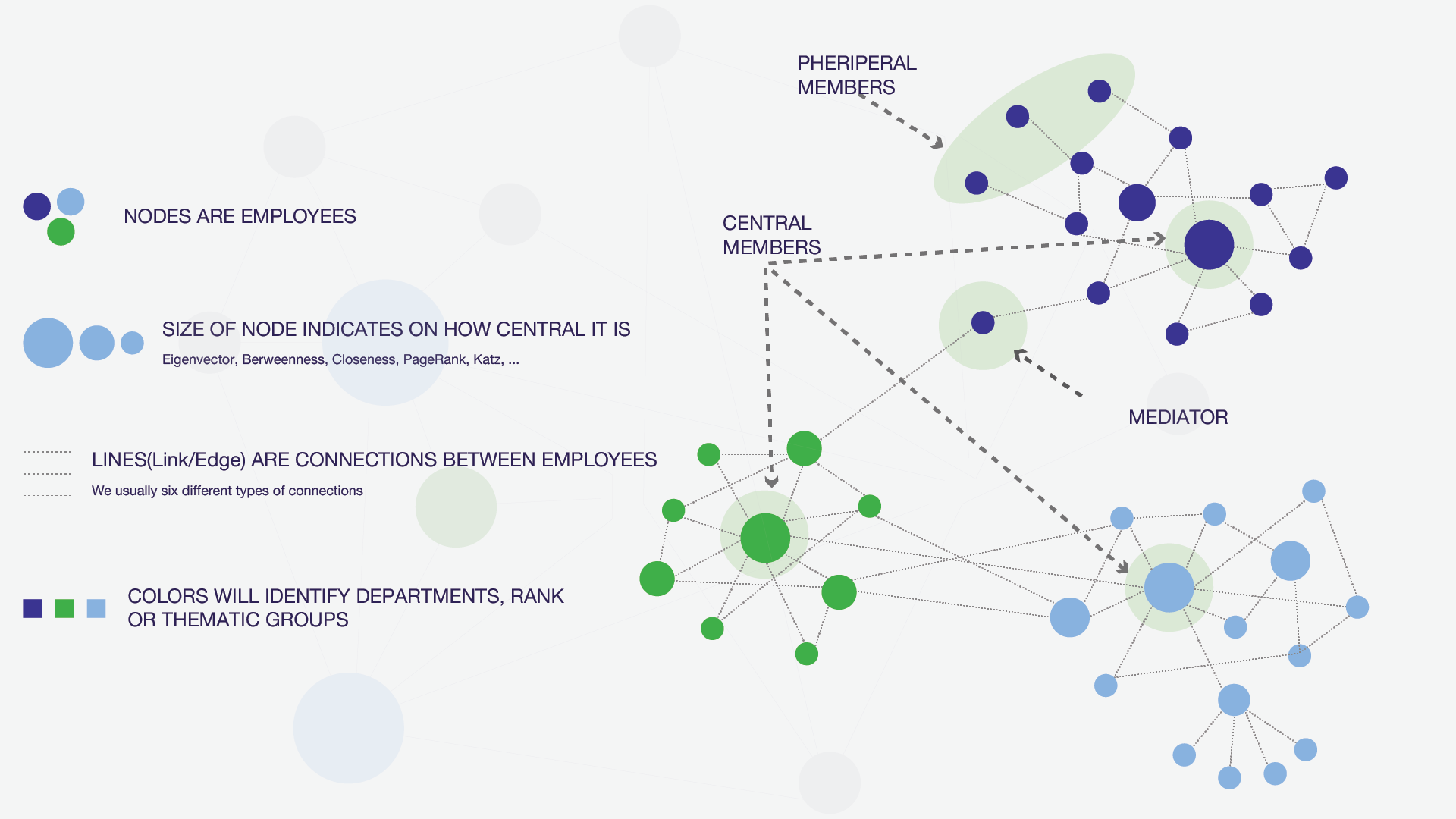 Who needs ONA and when?

Any organization (business, state, NGO) hiring 50 or more employees and matching with at least one of the following, needs Organization Network Analysis (ONA):


What does working process look like and how are results submitted?

Unlike traditional methods of employee evaluation and organizational inquiries in the company, network analysis is based solely on factual data and does not require respondents to assess other employees or structural units. This is why, completing the network analysis questionnaire never makes employees feel nervous or awkward.

The success of changes taking place in an organization, together with the right visions and action plan, naturally mostly depend on the individuals involved in the transformation process. Here comes the question – who are those employees whose support can be used to turn changes into a huge success? Network analysis ensures that they are detected, as it enables us to discover competence and opinions leaders on the level of structural unit or rank.

With the help of an interactive reporting platform, it only takes a couple of seconds to get a comprehensive picture of the leaders:

Network analysis clearly demonstrates the risks related to organizational development, such as:

We also ensure the timely identification of risks through a reporting platform: 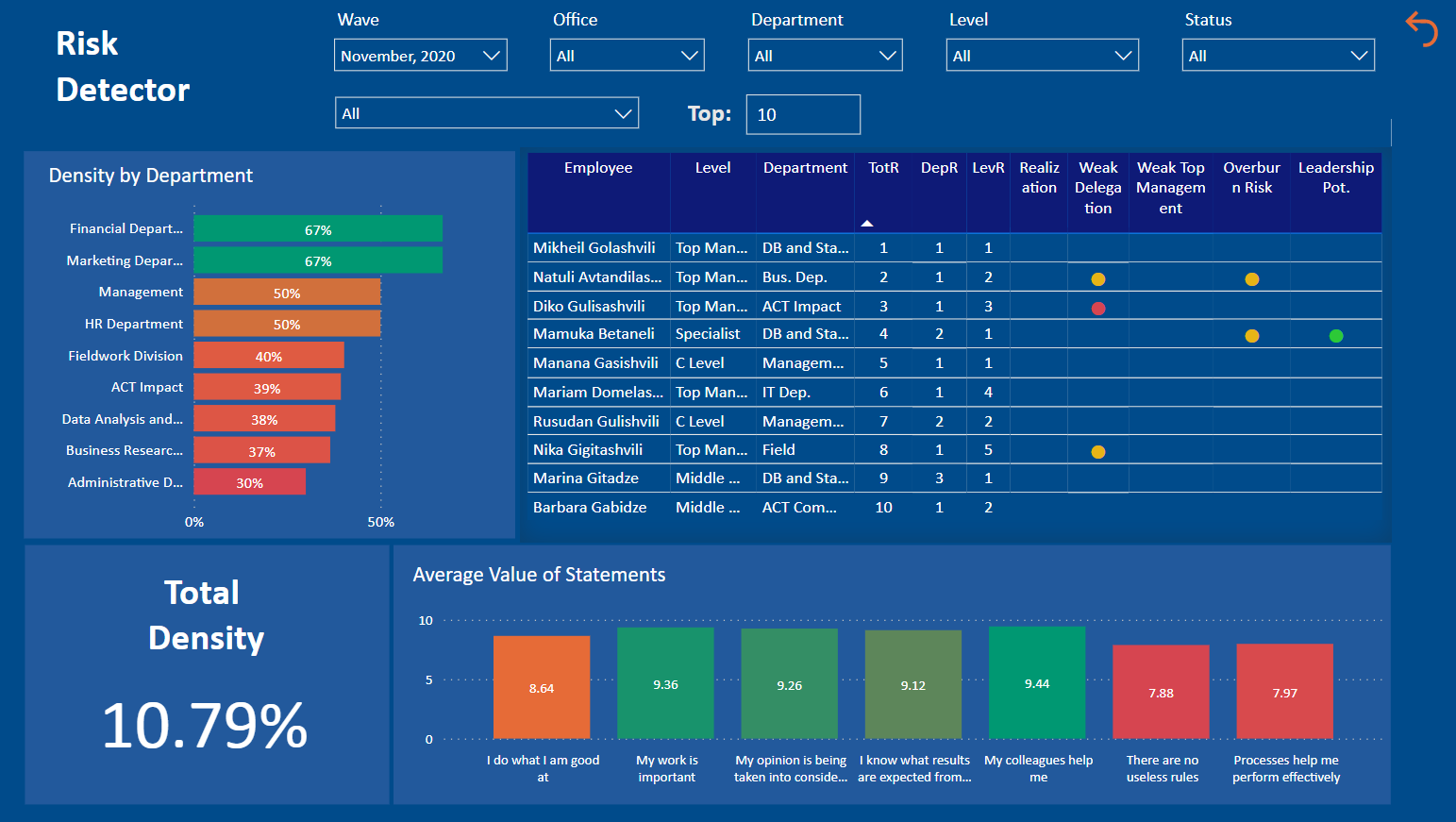 Innovation network analysis is the basic instrument that will give us clear vision of the extension of leaders oriented on improving the organization and a lack of such leaders in thematic groups. The obtained information helps the company to effective plan programs that stimulate innovations.

There is no organizational transformation without improvement to the internal processes and operational systems. The process analyzer is based on ONA and identifies anomalies between individuals and structural units, such as:

Benefits from the process analyzer are particularly high when combined with products offered by ACT such as business model diagnostics and the audit of existing processes.

Highly effective organizations act as strong networks having unified culture, information systems and talents. Business or social communication among employees form thematic teams that are more or less cohesive to each other. ONA ensures in-depth analysis of team collaboration which enables us to identify weak spots in team collaboration or highly concentrated isolated islands.

Network visualization serves as a kind of guiding map that helps us to navigate. Team collaboration analysis is particularly important over the course of system reorganization, company merge/split and switch to Agile Management.

As we have already noted, network analysis is oriented on studying hidden mechanisms formed by means of collaboration between employees. An organizational network is the actual architecture that manages ongoing processes in the company.

Even though we have already discussed organizational risks, we need to emphasize that network analysis can bring even more benefits if it is planned in two stages: before the commencement of transformational processes and after they are completed. Comparison of the planned and actual results gives a crystal clear picture of how effective expectations were reflected in the structure and collaboration. This kind of comparison enables us to have a clearer understanding of how healthy the organizational anatomy truly is.

Motivation of employees in crisis

Our new reality is very much alike if you get up 15 minutes earlier to work day, go to “home office”, work, mix personal and work time, head over to your own kitchen during lunch, come across with shopping list when working on projects and mostly spend your weekends on the balcony. New reality makes our behavior and work principles homogenous. In the environment where homes are turned into offices a circle is formed where routine is repeated every day for everyone. How is it possible under these circumstances to keep your work motivation or even increase it?

When speaking about motivation, we most definitely need to mention Abraham Maslow, founder of motivation theory, whose pyramid cannot be avoided by any organization. On initial stage of keeping employees motivated, Maslow considers basic needs: physical environment and safety, following level is taken by psychological needs: belonging, love, recognition and finally, he sees the need of achieving one’s full potential and self-actualization.

According to Maslow’s hierarchy, organizations that fully meet employees’ needs from basic needs to top level, significantly increase their motivation. However, this classic model was altered by the pandemic. Now, employees who had their physical environment covered in terms of basic needs, have an upside down situation: they make stocks of food, pile up hygiene and medical products, stay at home and take care of their own and family member’s health. Under these changes, pyramid is completely altered and it becomes necessary to discuss changed tactics of employees’ motivation.

In Georgian reality, “upside down” pyramid appeared to be most simply adaptable for those companies whose organizational strengths became transferable into remote service as they already had digital processes well-established. To motivate employees, these and other companies had to make decisions based on the stage where large portion of their employees were at.

We are sharing an example of our organization – ACT, how it manages to preserve the bottom level of pyramid so that based on the central part, it supports lower and upper levels and respectively, increases employees’ motivation.

Love, friendship, family, belonging – central part of the pyramid, psychological factors largely affect motivation of employees. As far as ACT’s management follows direct, consistent communication, uses open, free, less bureaucratic approaches, acceptance of their decisions is already quite high. In addition to this, the majority of employees has long history of working for the company, thus, the feeling of love and belonging, supporting each other stands high on psychological level. A feeling of belonging is enhanced during a crisis, when people love to be united, to be in the same boat, this strengthens them mentally and simplifies acceptance of novelties, new initiatives. Being united against the problem from the company’s perspective is perceived as ultimate motivator, while being united around the idea is a powerful tool in the pursue to achieving goal.

Physical environment – new fears emerged in terms of physical level: preserving a job, salary, mobilization of finances for meeting basic needs, physical place to effectively do your job. These fears compromise lower level and to terminate this, organization needs to have timely and right communication with employees. To address this problem, ACT made certain changes in terms of staff/salary, which resulted in preserving jobs for every employee. This decision, on one side eliminated fears in terms of safety and physical environment and on the other side, on central level, built level of basic needs on membership of one big family. Employees became motivated to create safe working environment for them and their colleagues, thus, the company shortly became entirely digitalized.

Self-actualization – some of ACT’s employees were on the level of meeting the need of self-actualization, while part of them, with right allocation of resources, were given a chance to show off their “hidden” skills during the crisis. Opportunity to demonstrate their potential additionally motivated people to receive recognition from colleagues and level up to the last step of pyramid where by fully realizing their skills, they could turn the challenge into an opportunity. Clear demonstration of this is a new consulting platform of ACT – www.act-strategist.ge formed with the idea of supporting other businesses under corporate responsibility.

When evaluating the steps we made, organization was able to obtain a larger picture through a feedback tool (internal study), based on which motivation of employees has remained the same for 57% during crisis considering the decisions made by management while motivation increased for 33% of employees. Inquired staff members also believe that changes will not affect company’s work: on expectation level, they perceived that company would work in regular regime, while they feel optimistic towards the future operation of ACT. As verified by this example, if psychological needs are met, organization culture and feeling of being united is in place, building values on them becomes quite easy, which is particularly important during crisis. 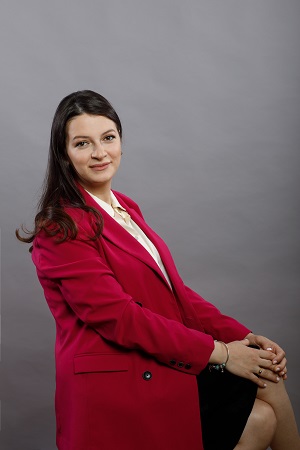